Karnataka Bank Officers’ Organisation was founded in the year 1973 heralding a new era in the bank officers’ movement in Karnataka Bank. Our founders who are visionaries and pathfinders thought of organizing the officers under a Trade Union to ameliorate the pitiable service conditions and pay and allowances of officers then prevailing in our bank. KBOO was registered as a Trade Union of officers on 03-09-1975 under the Trade Unions Act, 1926.

KBOO remembers with gratitude all its founder leaders who built its edifice brick by brick with self –less and painstaking work with sufferings and sacrifices so that the officer community of our bank can work with dignity and self-respect. The founder President, M.Keshavayya, is a person known for his erudition, principles, courage and conviction. The earlier General Secretary, A.Srinivasa Rao, was a dedicated leader par excellence. We salute their vision and foresight. We are equally grateful to KBEA, our sister union for its stellar role in nurturing and supporting us throughout. 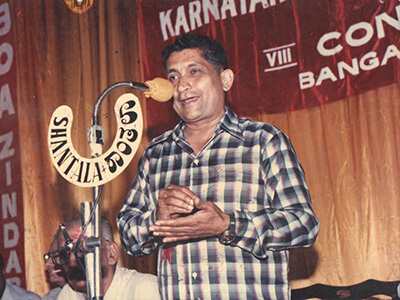 A Srinivasa Rao, the then General Secretary
presenting the report at our XI Conference.

Signatories to the first rules and bye-laws of the union

The signatories to the first Bye–laws of the Organisation submitted before the Asst. Labour Commissioner & Deputy Registrar of Trade Unions Mangalore and approved by him on 03-09-1975 are:

MILESTONES THAT WE TRAVERSED: A SAGA OF STRUGGLES AND SACRIFICES

Recognition as a sole bargaining agent of officers

The year 1985 was a watershed year for KBOO when it was recognized by the Management on 13-03-1985 as the sole bargaining agent of the officers in the Bank having secured overwhelming support of officers, roundly trouncing the then rival officers’ union –KBOA, thanks to the unflinching loyalty and trust and confidence of officers reposed in our Organisation.

It is a matter of great pride to record that over the years KBOO continues its journey and has become the only union of officers in Karnataka Bank with 100% membership – a symbol of continued trust and confidence of its members. It is on the bed-rock of trust and commitment of its members that KBOO has grown from strength to strength.

Challenged the arbitrary adoption of Service Rules for Officers

KBOO challenged the unilateral and arbitrary adoption of Service Rules for officers by the management in the year 1980 by filing a Civil Suit against the management seeking the withdrawal of the above rules in the Court of Hon’ble Second additional Munsiff of Mangalore in the year 1980 and initially obtained an ad-interim injunction against their operation. Finally the case went to Supreme Court and it could not be pursued further due to technical reasons.

Organised the first strike in our Bank

KBOO successfully organized the first full day strike action in our Bank exclusively confined to our own demands on 30-04-1990 on following among other demands:

KBOO moves into its own premises

It was a great moment for KBOO when it moved into its own office premises on 01-05-1993 at II floor, Somayaji Building, Bunts Hostel Road, Mangalore during its X Conference amidst seamless enthusiasm and all-round happiness of its members gathered there on the occasion.

We at KBOO always strived to balance our trade union responsibilities with the growth and progress of our beloved Institution. Our goal is to build a strong and prosperous Karnataka Bank together with the growth of our Organisation. Our union and every member is whole- heartedly committed in that direction.

It is a matter of great pride to note that starting with a modest membership of 23 members way back in 1973; KBOO has grown over the years in stature and strength and becomes the only union of officers in Karnataka Bank with 100% membership which reflects the trust and confidence of its members. With the present membership of 2600 plus, KBOO marches ahead pledging and rededicating to work for the welfare of officers in the Bank.

It is significant to note that even before the formation of AIBOA; KBOO was functioning as a full pledged union of officers in Karnataka Bank right from 1973. When AIBOA was formed in the year 1981, KBOO became one of the first units to get affiliated to AIBOA. KBOO continues to be one of the very active, vibrant and disciplined members of the AIBOA.

Karnataka Bank Employees’ Association representing 100% membership of award staff members in our Bank, affiliated to AIBEA is our sister union. Both KBEA & KBOO are the rich inheritor of the Twin Banner ideology and principle of unity and struggle. This relationship is unique because of shared values of trade union unity. Co-operation and co-ordination with KBEA is the corner stone of our policy.  We conduct joint struggles and campaigns on all common issues true to the spirit of Twin Banner. The 24th conference of KBEA elected Com. M.V. Muralidhar as President and Com. P.R.Karanth who has successfully completed 40 years of leadership was re-elected as its General Secretary.

As welfare measure a scheme of awarding Merit Scholarships to the children of the members has been introduced in the year 2007 by our Organisation. As per the scheme merit scholarships are being awarded every year to the outstanding children of our members who excel in SSLC/Equivalent exams and PUC/equivalent exams for pursuing their higher education. Every year scholarship amount of Rs.135,000/- is being distributed to the meritorious children of the members.

We salute our past leaders and members who have selflessly and tirelessly worked day in and day out with utmost commitment and dedication to build a powerful union of officers in our Bank–KBOO. We are confident that our members will surely continue to work in the same spirit in further strengthening our movement in the true tradition and legacy left behind by our founder leaders.

During this long journey of 40 plus years KBOO has sincerely and relentlessly strived to ameliorate the service conditions of officers and signed many agreements with the Management. As a most responsive union of the officers we pledge to continue to tread in this direction always upholding the interest of officers in our Bank keeping pace with their aspirations.

As an important stake holder in the growth and development of the Bank, we feel that we have a duty to articulate the collective will and wisdom of our members to safe- guard their interest and protect their hard won rights.  As a proud member of AIBOA we are in the forefront of struggles be it wage revision, be it to save the banking industry from take overs or be it to express our solidarity with the common working class of our country. The need of the hour is to strengthen the unity. We pledge to work towards this destination in the days to come.